So this probably isn’t a very accepted practice throughout our frugal DG investment community. While I am frugal with some things, I also believe in rewarding yourself and having some immediate satisfaction. I do hope and plan to live to an old age but you really just never know. I had a good buddy of mine from high school that passed away suddenly at the age of 33 last year. It was completely unexpected and tragic. While I am still saving and investing the majority of my income I do splurge for nice dinners and a nice car every once in a while. My total car payments are still well under 10% of my monthly income so I don’t think this was too crazy of a move.

I drove my last car for 7 years and It had been paid off for 4. It also had close to 100k miles on it so I was getting concerned with it starting to have some mechanical issues. It was anyway time for a new car. Some of my auto enthusiast friends advised on considering used luxury cars from Rock Motors or similar dealerships to save money. I knew getting a used car was indeed a practical purchase, however, I had already decided that this year I would start to look for a new luxury sports sedan. The reason I had paid it off early was that I had a terrible interest rate on it, over 14%! My wife received the last fairly new vehicle so It was my turn for the next one. A few of our friends did tell us to have a look online at websites, like Autozin for example (click for autozin), that have a large selection of vehicles for sale. Perhaps we should’ve looked on there, but I decided to go straight to the Audi dealership instead to have a test drive.

There is an Audi dealership close to my office so I decided to stop by. I knew I already liked the look and performance on paper of the S4’s but hadn’t driven one. So they happened to have a 2013 that had about 3500 miles on it. It was driven by one of the managers as a demo car. I knew before driving the car that even if I liked it that I would have to get a price and rate on the car that made sense. I wasn’t desperate for a vehicle and really planned on waiting until the fall to look for another one unless I got a really good deal. So I took the car for a spin and fell in love with it. The handling, smooth ride, aggressive growl and the performance were like no car I’d ever driven. So I got back and started to work out a deal. After two days of negotiating I was able to work out a deal and got 15% off the sticker price. I also got a fair price on my trade-in and I also was approved with a low 1.9% interest rate. The car also came with an additional extended warranty that goes out to 2018 so I don’t have to worry about anything breaking down.

All I need to do now is to look into getting insurance to ensure that I am covered should I get involved in an accident or so forth. I’ve heard that something like this safeco insurance review is worth looking into when it comes to insurance, so I will give this a read and go from there. I need insurance if I want to drive my brand new gorgeous vehicle. I still can’t believe that I decided to pull the trigger, and as of last weekend, I am the proud owner of a 2013 Audi S4 in Phatom Black Pearl!

So what do you think? Was this an irrational purchase? Audi vehicles are popular for car leases. The TT, Q2, Q3, Q5 and A3 are available through Intelligent Car Leasing. 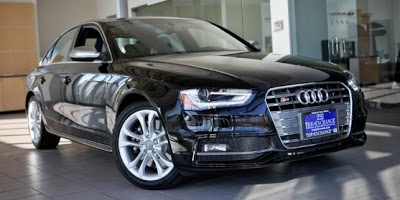