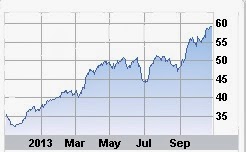 If I was trading a lot of highly speculative positions then this might not be a huge milestone. Typically highly speculative positions have large betas and there will be larger gains as well as larger losses to balance that out.  However, I have an unrealized 100%+ gain in one of my long-term DG stocks that I bought just last year!  Capital gains are secondary to dividend income but it’s still something I want to see happen.

That’s right, one of my best trades last year was picking up shares of Walgreen’s (WAG) on weakness.  It was back around June of last year when they had some issues with their Express Scripts deal and also announced they were buying out Alliance Boots.  I decided to pick up some shares on weakness.   Their 52-week chart is at the top of the page.

My only regret is that I didn’t buy more shares.  I’m actually due to add more to the company and probably will if prices ever come down a little.  My average cost will still be well below where shares are trading at. I have no plans of selling shares.

Has anyone else had this type of success with any of their holdings?