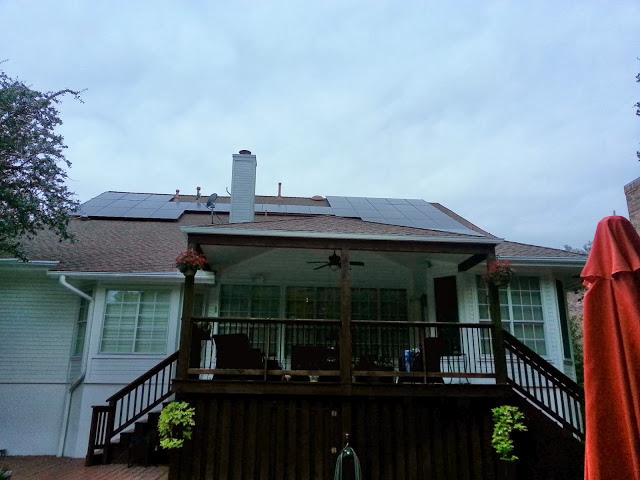 This has been a very long process. I originally started shopping and doing research in August of 2013. I decided that Buying a Solar System Can Be a Good Investment.

So I Made My Decision in September and picked out a system and installer.

I then scheduled a home energy inspection that basically amounted to extra sealant on the HVAC system joints and around all doors so that no light shows through when the door is closed. This was a pre-requisite in order to start the solar process by my utility company. This was done by a third party company referred by my installer and then was inspected by the city. I also needed to get a residential roofing contractor in to check for any existing damage to the roof, as finding out after the installation would have been costly.

I then got approval form my HOA and my installer received the necessary permits from the city to start the solar installation. A professional and reputable solar equipment supplier should be used with installations such as this, you need to know that a good job is being done and everything has been checked and ran through to make sure it works.

My install was supposed to start early November but was delayed to a lot of unusual rain we’ve had in central Austin. So my Solar Panels were Finally Installed in late November.

So I talked to the installer and had them come back out the next day to move those four panels a little bit higher on the roof. The picture above is prior to the movement of those four panels. This isn’t unheard of though – a friend who got their setup from Sandbar Solar & Electric had to make some adjustments too.

A new final inspection on the solar panels occured on 12/16 when the city approved the project!

I’m now fully approved and just waiting for the city to set me up on the grid, I was told this could take about a week.

I’ll be producing solar power by the end of the year. I’m excited and looking forward to cutting my energy costs. I have been told by my friend that I need to make sure that my newly installed solar panels are kept clean. They do it by following this solar pv maintenance checklist and apparently it’s meant to be really useful so I will have to give it a try sometime.

One of the cool things I also had installed was a monitoring system. I already use HomePlug technology to get internet from upstairs to my downstairs office since my house wasn’t wired with Cat-5 cable. Once the monitoring system was installed at my breaker, I can now view in real-time from anywhere I can get internet acces the amount of energy my house is using. 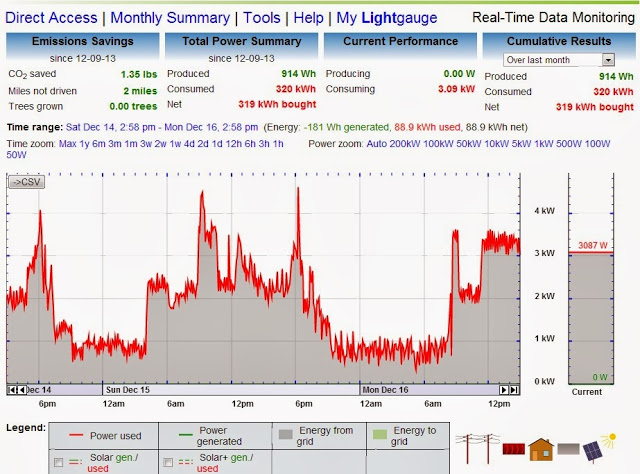 The 3087 W on the right bar changes every second. If I am watching the monitor and flip a light switch on, it will immediately jump up the amount of power I’m using. This probably has something to do with the fact that the speed light travels is almost 300,000,000 meters/second.

I already started going through my house and changing out some of the old bulbs with newer energy efficient ones. Once I’m on the grid, there will be a green line that shows solar produced right next to my usage. I will be able to see if I’m producing more or less than what I’m currently using.

I’ll be sure and post updates and will most likely include a goal for 2014 that relates to my energy usage.