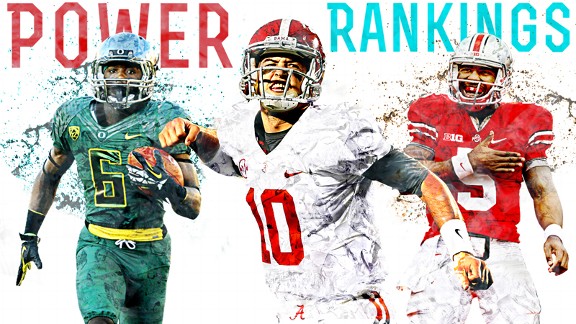 I’m trying to do these each month as long as there’s interest but I was busy and didn’t get to for December.

You can find previous months by following my Articles label.

This last screen dropped the list of Champions, Contenders and Challengers to 18, 39(+4) and 31(+3) respectively.

After sorting, I looked for any companies that had a 10YOC1, 10YOC3, 10YOC5 or 10YOC10 of 10% or higher. I applied this to the list of Champions, Contenders and Challengers. After applying this rule the lists dropped to 10, 25, and 27 companies respectively.
Next, I wanted to look to see if the DGR was increasing or decreasing. I highlighted in red the 10-year YOC’s of companies that were both reducing their rate of increases and still under 10%. 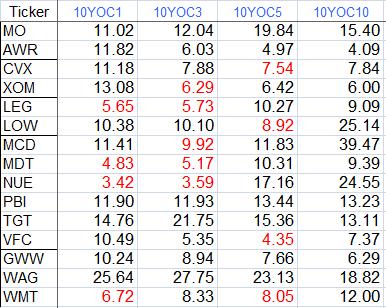 Companies got credit for increasing their dividends at faster rates. For example: The 10YOC5 for AWR in the example above was 4.97 and did not get highlighted in red because its 10YOC5 was higher than its 10YOC10 of 4.09.
Next, I decided to remove any company that had a 10YOC1 in the red for Champions and a 10YOC1 or 10YOC3 in red for Contenders and Challengers.
For the Example Champions list above this removed LEG, MDT, NUE and WMT.
This elimination dropped the list sizes for the Champions, Contenders and Challengers to 4, 11 and 18 respectively.
Here are the 33 candidates left that may be worthy to do further research on.

The list I came up with in December had 37 candidates.  It’s not surprising that this number has dropped once again as the markets have gone up, which has caused starting yields to go down.
A new company, Helmerich & Payne (HP), is on the Champions list.    They have increased their dividend for 42 straight years!  However, they weren’t previously on my list because of a much lower yield.  HP paid out .07 quarterly in 2012 and paid .15, .15, .50, .50 in 2013. They also already declared another increase to .625 payable March 3rd of 2014 with an ex-dividend of Feb 12th.  HP is in the business of contract drilling of oil and gas wells both on and offshore.  I just recently picked up shares of ESV (mentioned here) which has similar services.  However, ESV is all offshore drilling.  Instead of adding to ESV I’m considering 1/2 positions in ESV and HP assuming the research I do on HP checks out.  I think the companies could compliment each other.

COP made the Contenders list.  I own COP and it’s at full weight currently but I’d add more if it gets back down to at least 65.

On the challengers list I’ve already recently added to PM.  Also on the challengers is BAX which I think is at fair value right here.  I haven’t considered the company before since I already own both BDX and MDT but I’ll be looking into the company more.  BAX does have a higher starting yield which I like.