If you hadn’t taken notice, the remaining ban on incandescent bulbs has gone into effect. There will be no new 40W or 60W incandescent bulbs produced. Retailers will only be allowed to sell out of their already existing inventory.
This doesn’t mean you can’t use them if you already have them. They are cheaper than the alternative CFL’s and LED’s. Wait….. are they really cheaper?
Sure LED’s have a larger upfront cost to buy compared to a CFL or an incandescent, but LED’s have the best energy efficiency, up to 75% less. They also last longer, your typical incandescent lasts at least 700 hours, but LED’s can last up to 50,000 hours. Do the maths yourself to see how much you end up saving in the long run.
They’re so efficient and cost effective that LED’s are even being used to replace traditional Neon lighting. Sites like www.neonfilter.com all use LED’s now, and it runs up to 20% more energy efficiently than traditional Neon.
So before I end up writing ten paragraphs about the history and benefits of LED lights, let’s just put it down that they are as good as incandescents and cheaper than the upfront cost might suggest. No need to buy incandescents in bulk for fear of never having good bright lights ever again.
Buy LED Lighting on Amazon

– you can find specific bulbs I used below
Types
Let’s back up a minute and talk about the main types of bulbs there are: 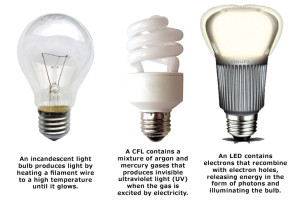 Incandescent: These are being phased out and are known to be a very cheap upfront cost, high energy usage, and they produce a lot of heat. They last 700-1000 hours and can be used with a dimmer.
Halogen – These are a variation of incandescent. They get extremely hot and do come in energy efficient varieties (don’t touch these with hands, oil can cause them to explode). These are mostly used in under-cabinet, pendant lighting (find out more) and recessed cans. They can last about 3,000 hours. They also give the closest approximation of natural light.
Compact Fluorescent (CFL): more expensive upfront cost, lower energy usage (they use 1/4 the energy of incandescents and last 10 times longer), medium heat. They also contain trace amounts of mercury. They don’t work well on dimmers.
Light Emiting Diode (LED): most expensive upfront cost (5-6 times higher than CFL’s), lowest energy usage, low heat. They are rated up to 50,000 hours! This is 5 times longer than a typical CFL.
Light
There are also different types of light and colors of light. Two bulbs with the same watt rating won’t always produce the same amount of light.
You need to check the LUMENS. Yes it’s lumens that tell you the brightness of a bulb. If you want to replace a traditional 40w incandescent that produces 500 lumens then you want to be sure that you pick up an energy efficient bulb with the same light output.
Energy efficient lights that say 40 W “equivalent” aren’t exactly equivalent. They can range from 300-500 lumens.
Color
Next you want to check out the color of light that you want. Daylight is 6500K but traditional incandescents are usually around 2000K. So make sure you are getting the appropriate color.

Shapes
Next there are different types shapes of lights. For me, I don’t care a lot about the shapes as long as they fit but here are a few:

Bases
Next are the bases. My house only has screw type bases with three main sizes. I have the E26 (standard), one fan has the E17 Intermediate and I have several fans that have the E12 (Candelabra) base.

I know, there’s so many combinations that it will make your head spin! This can seem like a lot of information to digest, and if you’re an electrical noob then it could get confusing.
If you think an expert could help you out better, like maybe an electrician from Xpert Electric (view website here), then feel free to reach out to them for any information. Professionals can usually help you make sense of your home’s electricity better, and can probably also help you decide which lights would suit your home and needs.
But once you figure out the types of bulbs you need it’s fairly simple to go and start buying replacements.
Here’s two previous article on what bulbs I used to replace some of my lights in my house:

DIY – Replacing Fan Lights With LED’s
DIY – How to Install a 3-Way Light Timer (and the bulbs I used)
Example
One of my fans for instance has 4 (40w) incandescents at 450 lumens each. I just purchases 4 7.5W (they say 40 w equivalent) 500 lumen LED lights that are 3000k color on Amazon for $28.
Another bonus is that these lights are actually a little brighter than what I replaced since they are 500 lumens versus 450.
The LED’s are rated for 25,000 hours of usage. At 3 hours a day they should last 22.8 years!
At 11 cents/Kwh, these bulbs will cost $.90 / year to operate x 4 bulbs = $3.60.
A regular 40 W incandescent at 3 hours/day would cost $4.80. It would cost $19.20/year to operate these bulbs.
Let’s assume the incandescent bulbs were free. The LED bulbs cost me $7 each or $28 for the set. Since I’m saving $15.60/year then my break-even point would be 1.8 years. That’s not bad!
Obviously the less you use the lights then the longer the break-even period would be. If you only used the lights 1 hour a day then the break-even would be 5.4 years.
I do have some outside lights that are 60W and I leave on about 8 hours a day so these were the first to get replaced.
I plan to replace the bulbs that I use the most first and work my way to the ones I use the least.
This will also help me meet one of my 2014 Goals of reducing my electricity usage.