This article originally appeared on The DIV-Net on January 22, 2014.

I posted back on December 30, 2013 that I picked up an initial position of 100 shares of ESV.  You can find that post here.
I also took notice of Helmerich & Payne (HP) during my most recent January CCC 10-year YOC Rankings.  HP wasn’t on my radar before because its dividend was too low for me to notice.  Now a Dividend Champion with a 42 year streak of increasing dividends is paying a yield of over 2%.  Now this isn’t huge but their recent growth is where the attraction is.
Let’s First take a look at ESV.
Ensco plc (Ensco) is a provider of offshore contract drilling services to the international oil and gas industry. As of December 31, 2011, the Company owned and operated an offshore drilling rig fleet of 77 rigs, including rigs under construction. As of December 31, 2011, its rig fleet included seven drillships, 13 dynamically positioned semisubmersible rigs, seven moored semisubmersible rigs, 49 jackup rigs and one barge rig. Its customers include national and international oil companies. On May 31, 2011, the Company completed a merger transaction (the Merger) with Pride International, Inc., (Pride), ENSCO International Incorporated, an indirect, wholly owned subsidiary and predecessor of Ensco plc (Ensco Delaware), and ENSCO Ventures LLC, an indirect, wholly owned subsidiary of Ensco plc (Merger Sub). Pursuant to the Agreement and Plan of Merger, Merger Sub merged with and into Pride, with Pride as the surviving entity and an indirect, wholly owned subsidiary of Ensco plc.
ESV’s sole focus is offshore drilling.  Ensco provides offshore drilling services as deepwater, midwater and premium jackup services.  They have the largest premium jackup drilling fleet in the world holding the most 400′ rigs of any fleet.  Part of the reason I like ESV is for their estimated future EPS growth.  Also ESV has increased their dividend dramatically in the last year.  ESV is rated #1 in customer satisfaction for three consecutive years.  They have a Baa1/BBB+ rating from Moddy’s/S&P.  ESV also has a younger fleet age and good international exposure.
See the slides below from the Dec. 5th presentation at the Wells Fargo Conference: 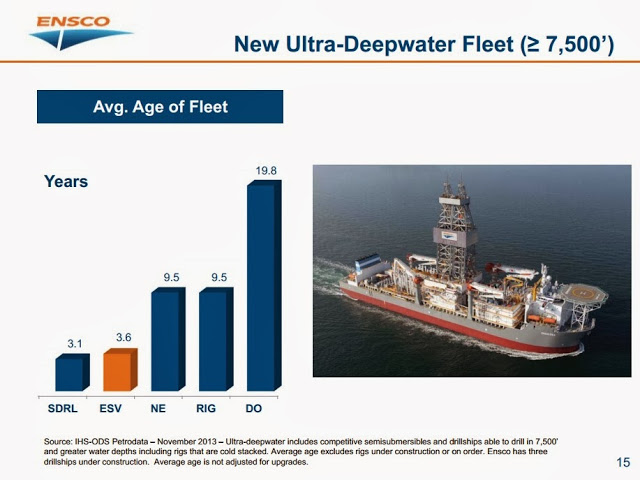 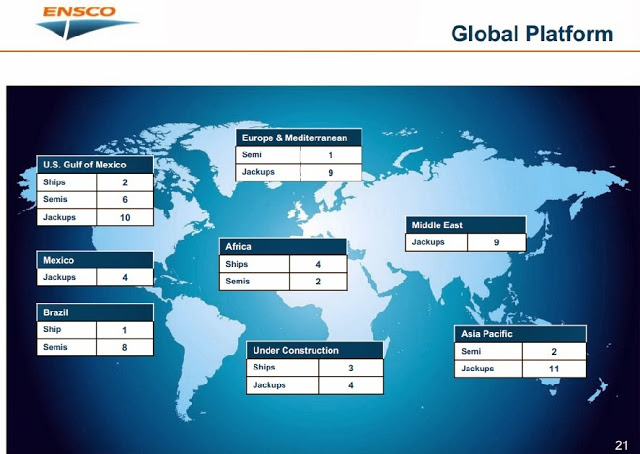 Now let’s look at HP:
Helmerich & Payne, Inc. is engaged in contract drilling of oil and gases wells for others and this business. The Company’s contract drilling business is composed of three reportable business segments: U.S. Land, Offshore and International Land. During the fiscal year ended September 30, 2012 (fiscal 2012), the Company’s U.S. Land operations drilled in Oklahoma, California, Texas, Wyoming, Colorado, Louisiana, Pennsylvania, Ohio, Utah, Arkansas, New Mexico, Montana, North Dakota and West Virginia. Offshore operations were conducted in the Gulf of Mexico, and offshore of California, Trinidad and Equatorial Guinea. During fiscal 2012, the Company’s International Land segment operated in six international locations: Ecuador, Colombia, Argentina, Tunisia, Bahrain and United Arab Emirates. The Company is also engaged in the ownership, development and operation of commercial real estate and the research and development of rotary steerable technology.
Here’s a look at HP’s fleet mix from their 01/08/14 presentation at the Global Energy Conference: 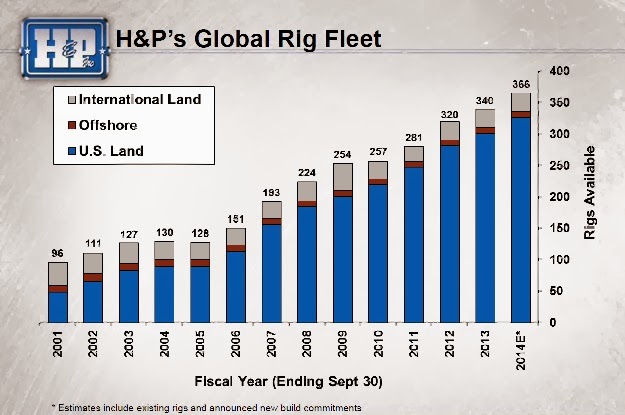 As you can see, HP’s primary focus is on U.S. land rigs. 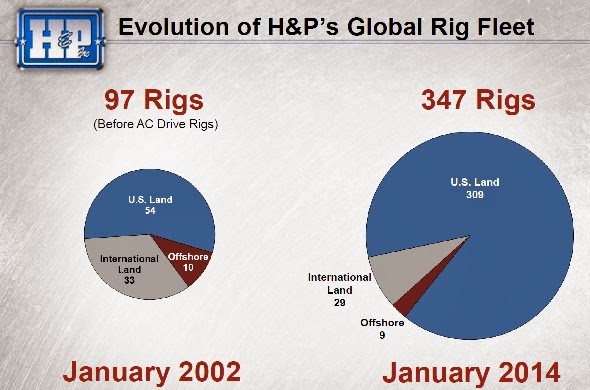 Here’s a couple of bonus FAST Graphs to compare also: 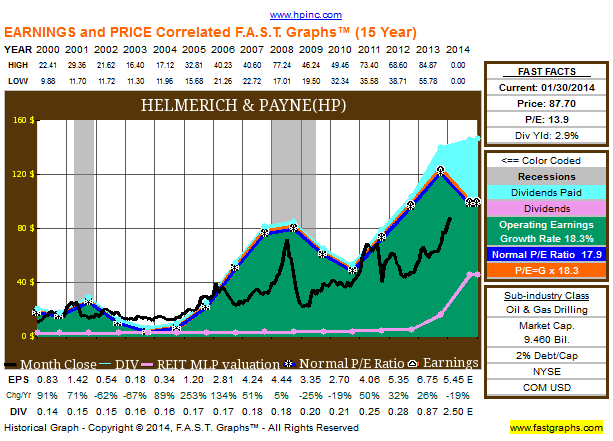 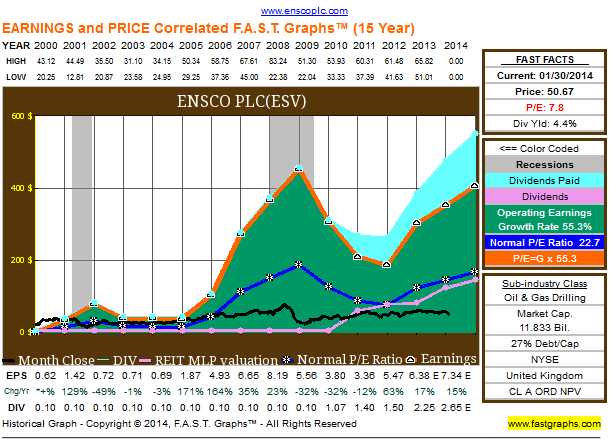 Here’s a look at recent dividends paid by both ESV and HP: 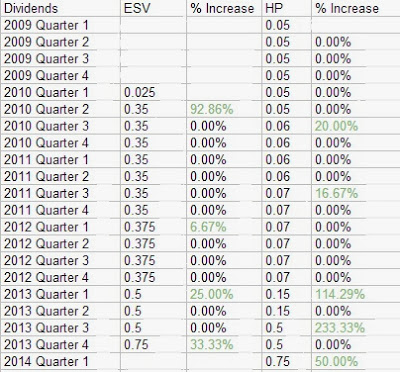 Notice that I highlighted in green the increases.  Both companies have had some dramatic dividend increases lately.  This is most surprising with HP since they have been increasing their dividend for 42 straight years!
HP wasn’t even on my radar until recently when they increased their dividend to .50 and then to .75 payable in the first quarter of 2014.
Here’s what the growth of $10,000 would have looked like over the last 5 years.  HP beat the S&P 500, ESV and the Oil & Gas Drilling industry average. 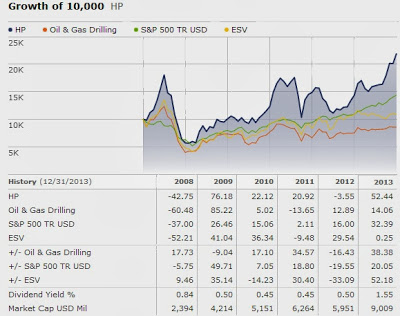 With HP sitting near their 52-week high, I’m inclined to add to my ESV position.  I’m also more interested in the international exposure and future EPS growth.

Disclosure: Long ESV and I added another 100 shares after the article.

This article was written by All About Interest. If you enjoyed this article, please consider subscribing to my RSS feed.