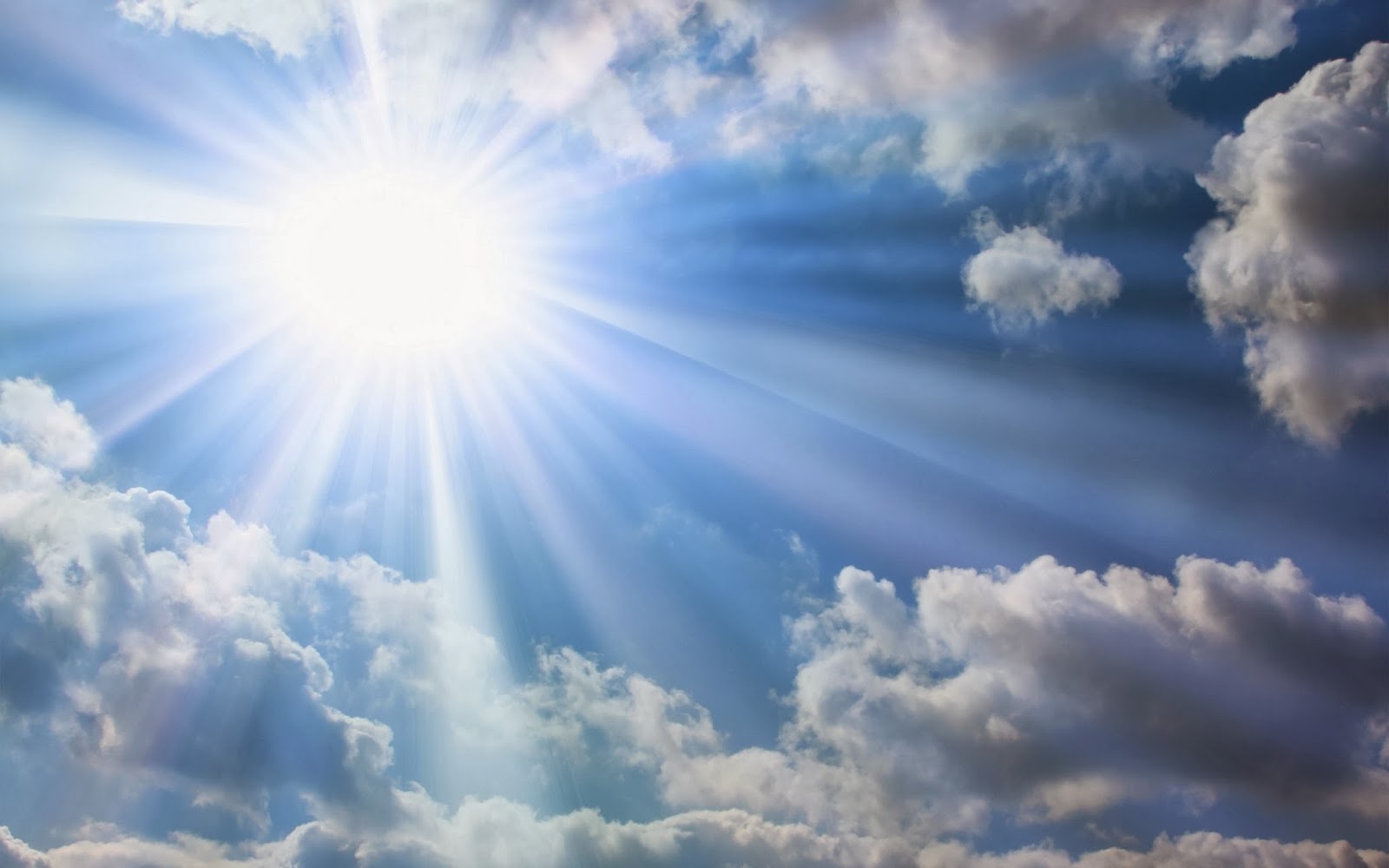 So most of you know I installed solar panels last year after deciding solar was a good investment.  They were finally on the grid by the end of December.  So I’m finally able to report some production numbers.  Unfortunately, my first bill was pro-rated due to my billing cycle so my first bill was about $12.00.  I just received my new bill for my first full month of production and here are the results below.

Here’s what my monitoring system reported: 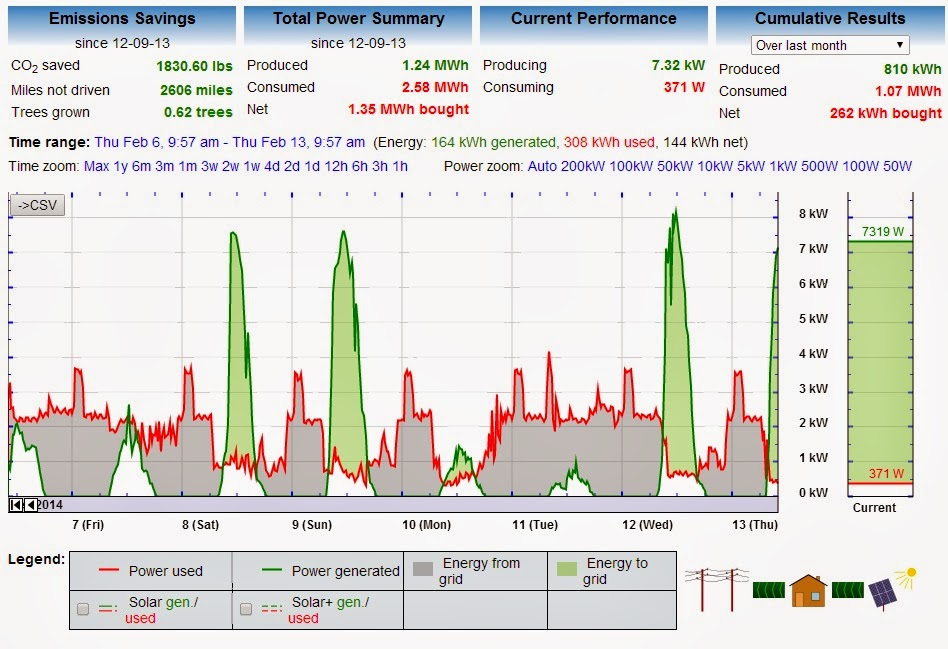 Since the end of December my system has produced 1.24 MWh or 1,240 KWh of electricity.  All of January I produced 810kWh and consumed 1070 kWh (1.07MWh) of electricity.  There’s a little bit of interference in the line so these numbers aren’t totally accurate.  I’ll have to get the exact numbers on my meter.  One of the best things about this monitoring system though is that it’s in real time.  I’ve been going through my house and replacing all the high usage light bulbs with LED bulbs.  I believe I’ll be able to cut significantly my actual usage over last year.  This was also one of my Goals for 2014.

Here’s the actual reading on my digital meter tied to the grid when I checked at the end of January:

Here’s the actual reading on my digital solar meter:
990 – (this is the total amount of kWh that I produced)

I actually beat my original projections in terms of production but my credits were lower than projected so the value of my energy output was lower than expected.

Here’s my original proposal which I’ll be checking to see how I do this year: 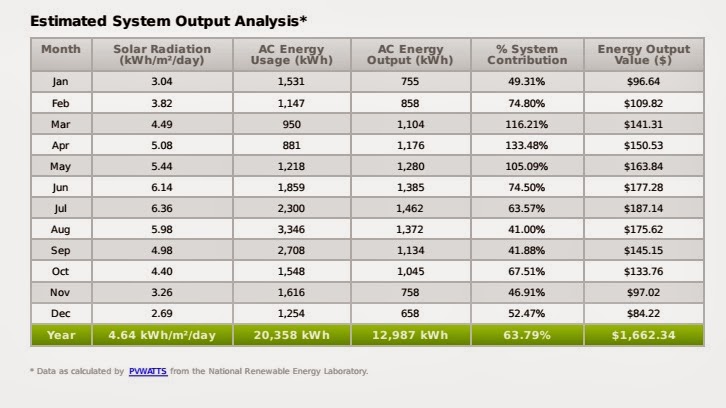 So here’s my understanding of how it works.  The electric usage I have while I’m generating solar energy gets returned to the city.  If I am producing more than I’m using, the extra energy is also sent to the city but the city buys it from me.

One negative I didn’t know is that the city comes up with the “value of solar” per an algorithm they developed.  They actually changed this algorithm to start 2014 so the value they pay per kWh actually went down.  Any credits roll over to the next month but reset at the end of the calendar year.

Here’s a look at what the city has paid the last few years:

Based on the current algorithm, this is what they would have paid in the past:

So this is a bummer to know that they can drop your credits from year to year.  They are currently the lowest they have been since 2006.

Here’s the current rate structure before additional add-on fees (it’s a tiered system sort of like our tax system): 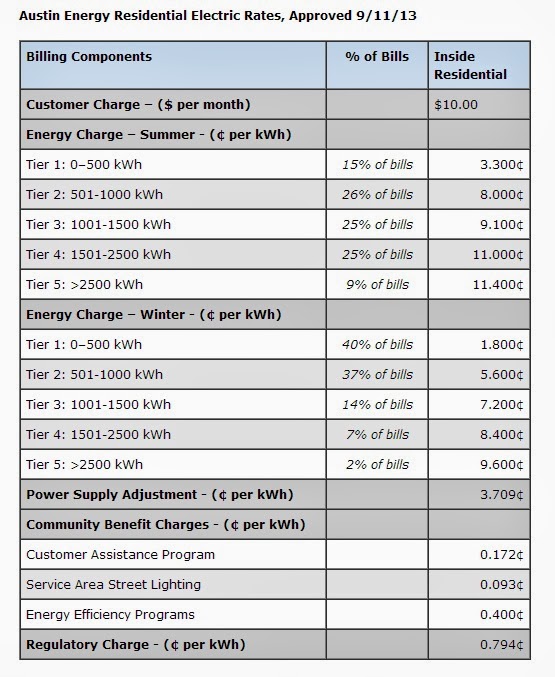 Instead of combining my solar bill with my water bill, it’s now a new bill and a new account. The city charges $10 per account.  My electric was previously together on the same bill with my water.  If it wasn’t for this new account I’d only have a bill of $0.05.  I called and the city gave me some bullshit excuse so it’s just basically another way for them to collect money. 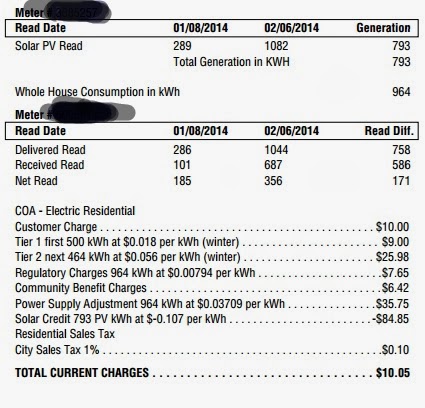 I’m still not sure how they came up with the Whole House Consumption of 964.  I am waiting on a call back about this and I’ll be able to provide more clarity next month.

So this is a little bit of a learning process but I look forward to seeing how the numbers match up with my projections.  Overall, I’m still happy with the panels and it’s opened up my eyes to my energy consumption with the monitoring system.