Happy holiday week to everyone!   It’s time for another addition of my CCC rankings by 10-year YOC.

Sorry I was busy last month and wasn’t able to get this update out in time.  With higher markets and some volatility, there have been some changes to the lists.

The first step was to sort all stocks by their current dividend yield and eliminate any stocks not paying at least a 2% yield.
Next I sorted all columns by TTM P/E and eliminated every stock with a TTM P/E over 18.  I do realize this eliminates a lot of REIT’s, MLP’s, and telecom stocks.  I’m ok with this since I’m not really targeting these stocks right now.  Then I decided to eliminate any Champions with a 10-Year CAGR < 5%, followed by any Contenders with a 5-Year CAGR < 7 % and finally any Challengers with a 3-year CAGR < 7%.  This screen eliminates a lot of slow growing companies like utilities.

Companies got credit for increasing their dividends at faster rates. For example: The 10YOC5 for AWR in the example above was 4.97 and did not get highlighted in red because its 10YOC5 was higher than its 10YOC10 of 4.09.
Next, I decided to remove any company that had a 10YOC1 in the red for Champions and a 10YOC1 or 10YOC3 in red for Contenders and Challengers.
For the Example Champions list above this removed LEG, MDT, NUE and WMT.
This new round of elimination dropped the list sizes for the Champions, Contenders and Challengers to 4(-1), 10(+1) and 30 (+4) respectively.
My Results
Here are the 44 candidates left that may be worthy to do further research on: 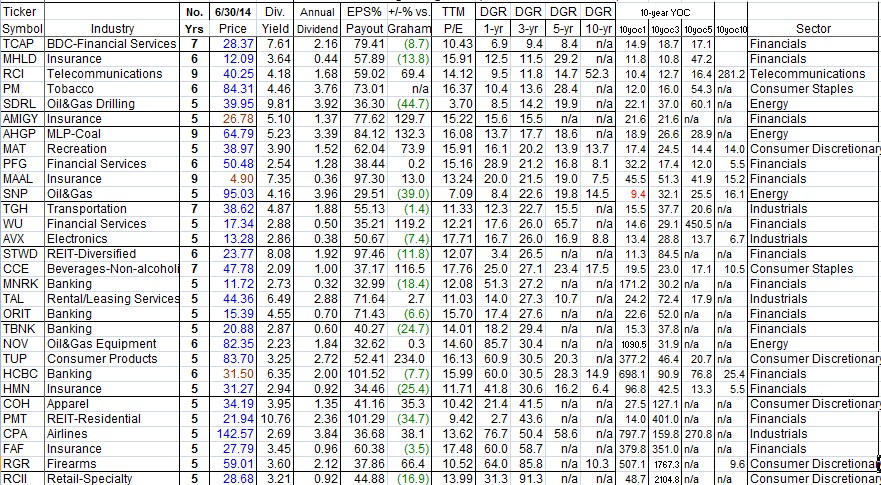 (click to enlarge)
On the Champions list, there were a few changes from the last list. First, CVX, FDO and MO did not make the list this time since their stock prices have increased.  We have a new company on the list, NC.   NC’s latest increase in May was only 3% so this company won’t be on the list next year.   With many solid companies pushing P/E’s well over 18, this list will continue to be small.
There were a few new companies on the Contender’s list like DE, LMT and WEC.  If you notice, I included DE since the CCC list hasn’t taken this year’s increase into account.  If you didn’t notice, DE increased their dividend by 18% and I mentioned that here.

The Challenger’s list added a few new companies.  Additional companies now include AVX, CCE and NOV to name a few.  I also left SNP on the list since they were close to making the cut.

I like this list as an additional watch list.  I know I posted recently a Watch list of 50 companies that I’m interested in owning at some point if the price is right.  It’s more of a static list that I’ll change as I see fit.  The thing is that I’m already around my target portfolio size of 40, so the majority of my purchases will be of existing positions.  I did add a 10-year YOC column based off the 5-year CAGR to my portfolio and watch list though.

Keep in mind that this is just a starting point and I feel these companies need further research before making an investment.You can find previous months by following my CCC Rankings label.
*photo courtesy of ESPN