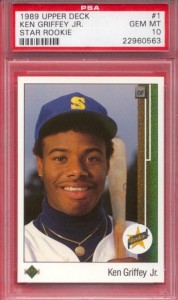 If any of you were like me, I loved collecting and trading baseball cards as a kid as much as some like playing bets on baseball games through online sports betting sites like FanDuel. I also grew up in the 80’s and 90’s when everyone seemed to be collecting. Well, now when I look up some of my prized cards like my 1989 Upper Deck Ken Griffey Jr. that used to be valued at up to $150, it can now be easily bought for $20 on Ebay. So sad… You may be into making money off of your baseball cards, but what about betting on actual baseball you love to watch? Not sure where to start? Click here for a baseball betting guide.

Let’s step back a minute. When I was around 12 years old, my brother and I were given a 1933 World Series New York Giants signed ball and program. My great-great-great-uncle played on the team and my grandmother secured the ball from a relative. If I had known that we had a relative who played baseball and was actually reasonably good at it, I may have thought about taking up the sport myself. I already knew the perfect place to find batting safety gloves so I was already on my way to achieving this dream if I so wanted, but to be honest, I was much more invested in the idea of collecting baseball cards and memorabilia than I was playing the sport myself. If I ever did get that itch to play I could always pick up a baseball bat from this page and have a go, however, I am not at that stage just yet. Anyway, until recently the ball had been sitting in a case getting dusty so I finally decided I should frame it up with the program. I wanted to get the ball authenticated though. I know the signatures are legit but it’s still nice to have a letter of authentication from a reputable company for display. I found that the top two companies for autograph authentication services seem to be PSA (Professional Sports Authority) and JSA (James Spence Authentication) after a little research and speaking to a local sports shop. I ended up sending the ball off last week to PSA and plan to get it framed up when it comes back within 10 days or so.

Well PSA also grades a lot of cards. I remember checking Ebay every once in a while and noticing that graded cards are going for a lot more than loose ungraded ones online. So I then started researching some grading companies. Apparently, the last few years, there has been a resurgence of collecting due to these grading companies. I just recently started collecting some of the cards I could never afford as a kid that are graded by PSA or BGS (Beckett Grading Services). Those are currently the only ones I am interest in.

It can get a little confusing though. BGS, for instance, assigns 4 different grades and an overall grade. You can see all grades including centering, surface, corners and edges which are each assigned their own grades. A BGS 9.5 is called Gem Mint just like a PSA 10 and typically sells for about the same prices. However, there is a BGS 10, Pristine Mint, that can sell for even more. The same Ken Griffey card in BGS 10 can go for up to $2,500 since they are much more rare than a PSA 10. See below what they look like. The requirement, I believe, is a minimum of 3 10’s and a 9.5 to be called a “perfect” Pristine 10.

There’s also registry sets where you can collect specific groups of cards and keep track. The top registry sets from other collectors are also posted. I’m currently working on a Nolan Ryan Topps set and a baseball hall of fame post-war rookie set. That HOF set is going to take a LONG time to complete. It includes cards like the 1951 Bowman Mickey Mantle that goes for thousands even in low grades. I currently just have 3 cards in the 85-card set. There’s currently 182 people working on the HOF set and I have a ranking of 157/182. My prized card right now is a 1955 Topps Sandy Koufax rookie card graded PSA 7 currently valued around $1000. 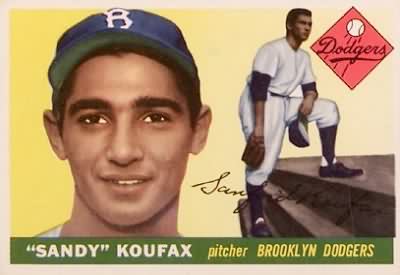 Now let’s look at a Nolan Ryan card I bought a few years ago and what it’s going for today. I got the Ebay “fever” and actually purchased a few cards a couple of years ago. I haven’t until recently started buying more. This was spurred by the World Series signed baseball and memories it gave me as a kid.

The last couple of years I did take some snapshots and record selling prices for some cards that I either bought or was wanting to buy. I’m attempting to find trends and see how much certain cards are appreciating. Take the 1976 Nolan Ryan graded a PSA 9 Mint for example.

Here’s a snapshot of what the card was going for in 2013 and what it’s going for about a year later. These are not asking prices by the way, these are actual sold auctions. 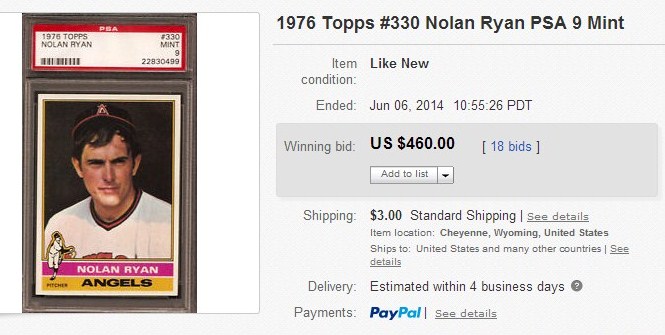 This card is up a whopping 64% in a little over a year. I don’t know about you, but that’s a heck of a return!

Here’s one more example of the Nolan Ryan 1968 Rookie Card that’s graded a PSA 8 NM-MT. I don’t have a snapshot but I recorded two selling prices back in 2013. The first sold on 07/10/13 for $1000 and the second sold on 07/11/13 for $1350. I know that’s a big variance in just a day but one was a buy-it-now auction so someone may have overpaid just a little for the second one. Either way, they are both well ahead today. Here’s a shot of a recent auction for the same card that ended in June.

Here’s one more example of a Reggie Jackson Topps Rookie card graded PSA 8 in both auctions.

By the way, that Reggie Jackson rookie above in a PSA 10 sold at auction in 2012 for over $100k in the Dimitri Young Collection.

As you can see, the market for the right cards can be outstanding. I obviously have a lot more research to do but sticking to hall of famer’s rookie cards could turn out to be a decent investment.

So what do you think? Do you collect sport cards and if so, what is your prized card? Is the rapid increase in prices caused by the baby boomers buying up all of their toys and collectibles they had growing up? These cards don’t pay dividends but they could produce some nice capital gains down the road. Either way, it’s fun and I don’t think I’ll lose any money on these purchases. It’s just another form of entertainment for me.