This last screen dropped the list of Champions, Contenders and Challengers to 32, 53 and 57 respectively.

Companies got credit for increasing their dividends at faster rates. For example: The 10YOC5 for AWR in the example above was 4.97 and did not get highlighted in red because its 10YOC5 was higher than its 10YOC10 of 4.09.
Next, I decided to remove any company that had a 10YOC1 in the red for Champions and a 10YOC1 or 10YOC3 in red for Contenders and Challengers.
For the Example Champions list above this removed LEG, MDT, NUE and WMT.
This new round of elimination dropped the list sizes for the Champions, Contenders and Challengers to 8, 18 and 39 respectively.
My Results
Here are the 44 candidates left that may be worthy to do further research on: 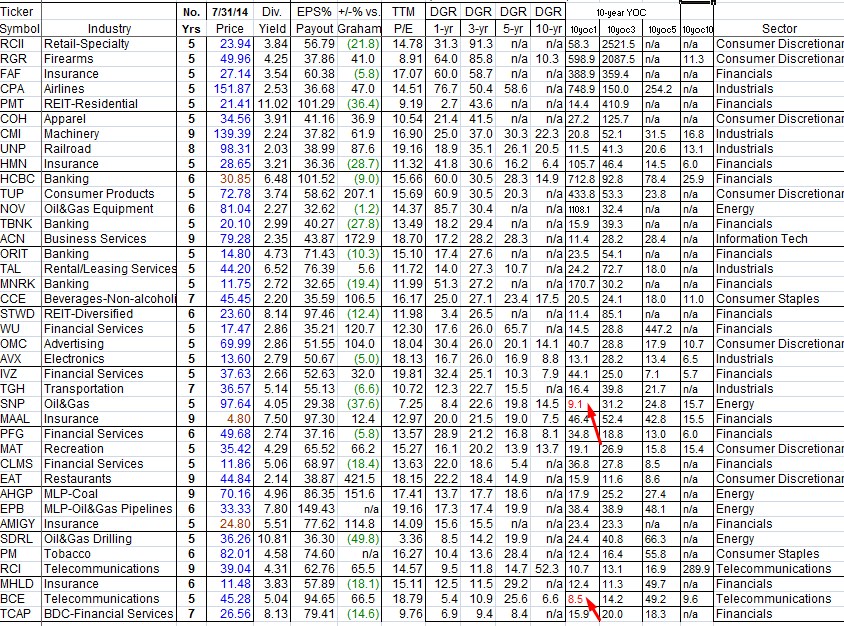 On the Champions list, there were a few changes from the last list. First, TGT, MO, NC and AWR are on the list.  Actually TGT has a slightly higher P/E but I still included them because they have really good dividend growth and a nice starting yield.  MO is back on the last after one month off.  NC is still on the list but after NC’s latest increase in May of only 3%, this company won’t be on the list next year.   AWR is now on my list after I upped the p/e.  I’m actually considering a purchase in AWR soon.
There were a few new companies on the Contender’s list like CAT.  After CAT’s recent dividend raise they are back on the list.  I also included a couple companies that are close to making the list, DE and GIS.  DE increased their dividend fairly recently by 18% and I mentioned that here.
The Challenger’s list added a few new companies including UNP due to me allowing a larger P/E.  I also included SNP and BCE since they weren’t too far off.