I was busy and skipped June’s update so I’m providing an update for both June and July.

If you’re interested in why I decided to go solar, you can read my previous posts:

I’m in the process of lowering my carbon footprint and at the same time saving money. I already mentioned using more energy efficient lighting (LED’s). As mentioned in a previous article, Why I’m Replacing All My Lights With LED’s, I picked up several LED lights from Amazon.com.

I’ve now got a new plan up my sleeve to drastically lower my electric bill. I’ll mention this one later but I will say it involves my pool and should be in place by the end of the week.

Keep in mind, all projected numbers were based on my original solar proposal by the installation company.

Here’s a visual representation of this information: 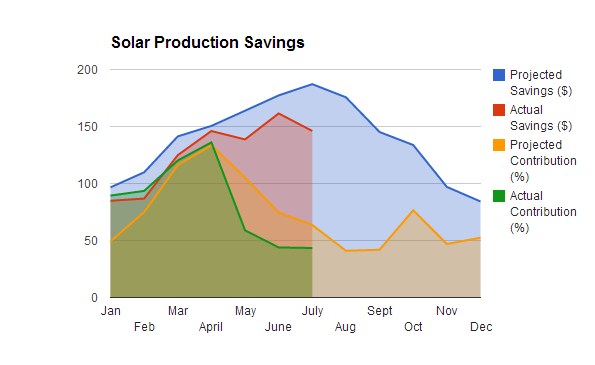 So what has happened over the last two months? Well I’ve used a heck of a lot of electricity for one thing! I’ve used more than I did last year. Now just one year of increase isn’t a reason to panic. If a stock only had a two year streak of dividend raises, that’s not a lot of history to go off of.

The good news is that I’ve saved a total of $727.29 from solar production so far this year. My projected savings has been higher than my actual savings (due to a drop of the amount of credit I’m receiving per kWh produced), so this month was no surprise.

I did replace a faulty A/C coil two months ago. Who knows what my usage would have been without that.

I have a new plan up my sleeve to drastically lower the biggest energy hog at my house. That’s my pool! Until I got the electric monitoring system, I would have thought my A/C would have accounted for the highest energy usage. I was wrong! The rough breakdown is 50% pool / 40% A/C / 10% everything else.

Here’s a chart of my actual solar usage versus last year’s usage: 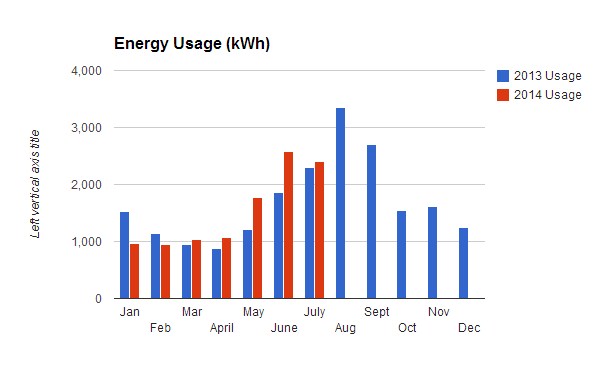 So I haven’t been able to beat my usage from a year ago the last few months. I’m hoping I can change that in August. Last year August was my largest energy usage month, coming in at a whopping 3346 Kwh, over 1000 Kwh more than July! With a partial month of reduced pool energy usage, I should be able to do much better this month.

I plan to continue tracking these stats for an entire year. This is still a learning process for me but I am happy I went solar and I’m hoping these results will influence others to also go solar.

Once I have convinced you to make the switch to solar, my next step will be trying to persuade you to look into solar battery storage, from somewhere like Rooftop Solar (https://rooftopsolar.us/learn/solar-battery-storage/) to see how that can further improve your solar situation too. My friend has one, and he said that it reserves energy that can be used for later consumption, and I think that it is a great feature, especially if it can help to reduce your costs even further. I may have to look into it myself because I think it’s fair to say that I haven’t been let down so far!

You can find previous monthly electric bill posts on my Solar label.