**Changes – This is the second month that I changed the P/E cap to 20 from 18.  I’m hoping that some higher growth stocks will now show up.

This last screen dropped the list of Champions, Contenders and Challengers to 34, 49 and 56 respectively.

Companies got credit for increasing their dividends at faster rates. For example: The 10YOC5 for AWR in the example above was 4.97 and did not get highlighted in red because its 10YOC5 was higher than its 10YOC10 of 4.09.
Next, I decided to remove any company that had a 10YOC1 in the red for Champions and a 10YOC1 or 10YOC3 in red for Contenders and Challengers.
For the Example Champions list above this removed LEG, MDT, NUE and WMT.
This new round of elimination dropped the list sizes for the Champions, Contenders and Challengers to 8, 18 and 39 respectively.
My Results
Here are the 54 candidates left that may be worthy to do further research on:
Champions 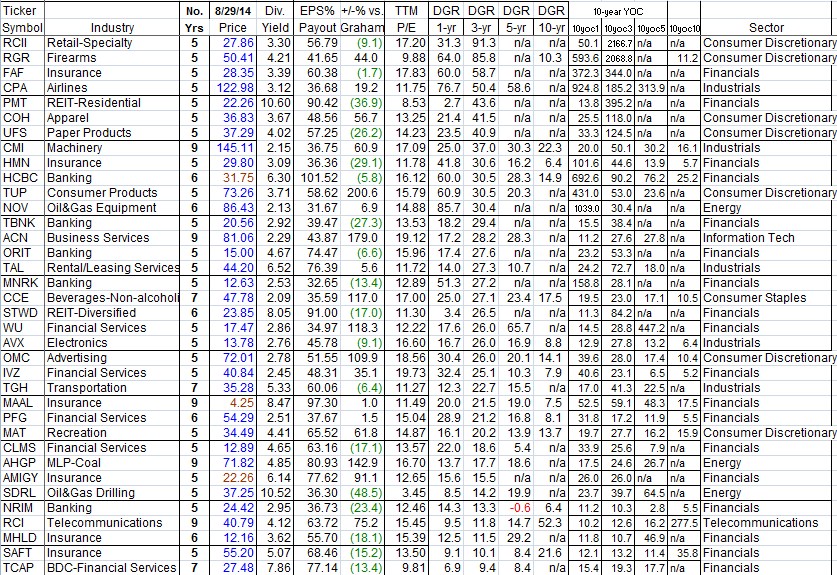 On the Champions list, there are no new companies but many were eliminated.  MO is still on the list and I just recently picked up another 100 shares.
There was just one new name on the Contender’s list, TEVA.  TEVA has been on before.  TEVA is still a full position for me, it’s up over 35% since buying shares in the high 30’s.  I really like the generics market and they are the largest player.  There were also several companies removed from the list.
The Challenger’s list added a couple new companies including NRIM and SAFT.