*I wasn’t able to get this out last month but was anxious to see what changes we might have now.

Companies got credit for increasing their dividends at faster rates. For example: The 10YOC5 for AWR in the example above was 4.97 and did not get highlighted in red because its 10YOC5 was higher than its 10YOC10 of 4.09.
Next, I decided to remove any company that had a 10YOC1 in the red for Champions and a 10YOC1 or 10YOC3 in red for Contenders and Challengers.
For the Example Champions list above this removed LEG, MDT, NUE and WMT.
This new round of elimination dropped the list sizes for the Champions, Contenders and Challengers to 5(-3), 24(+6) and 41(+2) respectively.
My Results
Here are the 70(+5) candidates left that may be worthy to do further research on:
If any of the below images are too small, right click and open in a new tab.
Champions 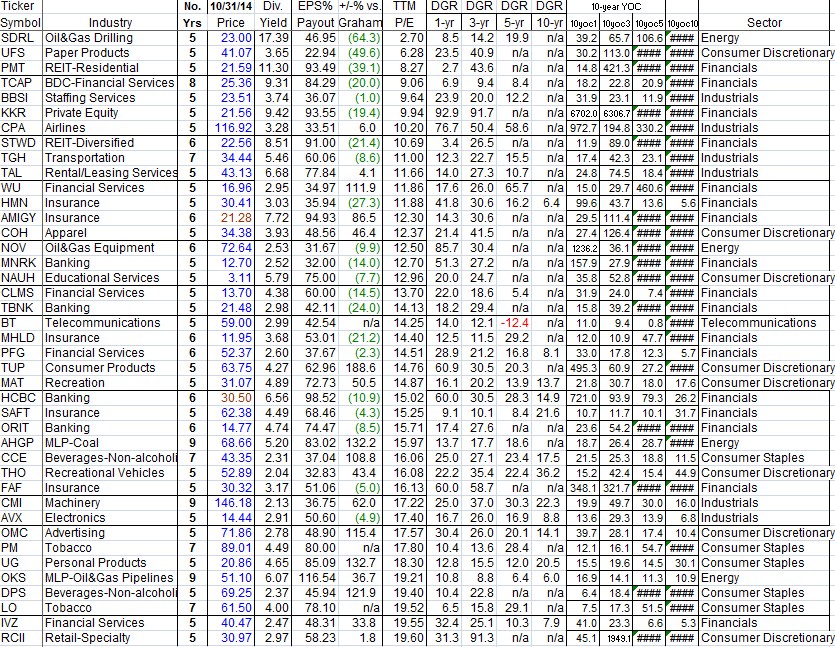 On the Champions list, three companies were eleminated, well four if you count XOM which I includes since they were close.  ORI scraped by since they do have a 10-year YOC of over 10 and the rate of increases has stayed the same.  I don’t know anything about that company though.  I already own CVX on the list.  I was looking at HP at one time but ended up with another driller ,ESV.  I’m looking at WMT but have a high investment in TGT already so I’m good there.
There were a few new names on the Contender’s list.  I also left a few companies on that I highlighted in red since they were close to making it.  Those names included DE , GIS and BBL which I already own.  There’s several Oil & Gas names that may be worthy of checking out further.
The Challenger’s list is fairly large at 41 names.  CMI is a company I’d like to add at some point.  A lot of these names will make up the future Contender’s and Champion’s lists.