*I haven’t done one of these in a while and it feels good to start posting again.  I’m excited to see what changes there might be.

The first step was to sort all stocks by their current dividend yield and eliminate any stocks not paying at least a 2% yield.

Next I sorted all columns by TTM P/E and eliminated every stock with a TTM P/E over 20.  I do realize this eliminates a lot of REIT’s, MLP’s, and telecom stocks.  I’m ok with this since I’m not really targeting these stocks right now.  Then I decided to eliminate any Champions with a 10-Year CAGR < 5%, followed by any Contenders with a 5-Year CAGR < 7 % and finally any Challengers with a 3-year CAGR < 7%.  This screen eliminates a lot of slow growing companies like utilities.

After sorting, I looked for any companies that had a 10YOC1, 10YOC3, 10YOC5 or 10YOC10 of 10% or higher. I applied this to the list of Champions, Contenders and Challengers.

Next, I wanted to look to see if the DGR was increasing or decreasing. I highlighted in red the 10-year YOC’s of companies that were both reducing their rate of increases and still under 10%.

Companies got credit for increasing their dividends at faster rates. For example: The 10YOC5 for AWR in the example above was 4.97 and did not get highlighted in red because its 10YOC5 was higher than its 10YOC10 of 4.09.
Next, I decided to remove any company that had a 10YOC1 in the red for Champions and a 10YOC1 or 10YOC3 in red for Contenders and Challengers.
For the Example Champions list above this removed LEG, MDT, NUE and WMT.
This new round of elimination dropped the list sizes for the Champions, Contenders and Challengers to 8(+3), 20(-4) and 75(+34) respectively.

Here are the 103(+33) candidates left that may be worthy to do further research on:
If any of the below images are too small, right click and open in a new tab. 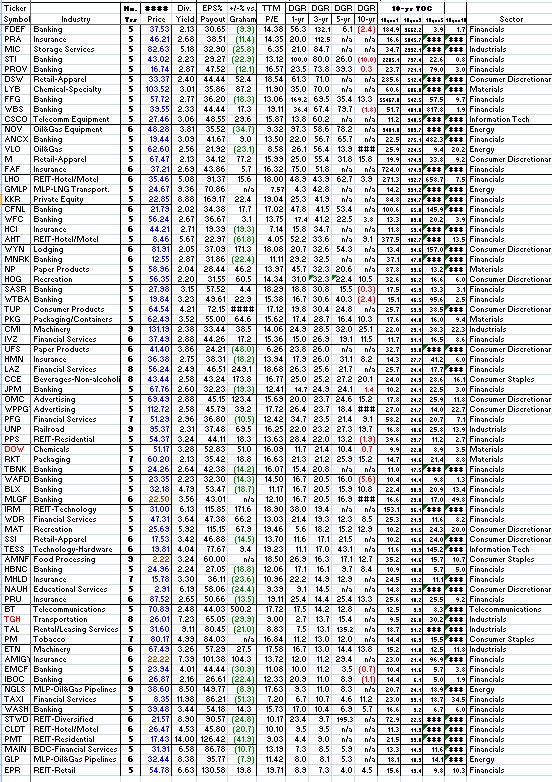 There’s a lot of changes since I last ran this screen.
On the Champions list, ADM, DOV and TROW on now on here.  I’ve noticed a lot of DG investors picking up TROW fairly recently.  The oil giants XOM and CVX were close to making the list along with Parker Hannifin (PH), a maker of industrial equipment with a lot of clients in the aerospace and climate control industry.
Then there’s the Contender’s list with usual names like BBL.  BBL is close to making the list and has been here a while.  I own CAT, BBL and LMT on this list.  MSFT , IBM and QCOM would be of further interest to me for more exposure to the technology sector.
The Challenger’s list is giant now adding more than 30 new names!  Most of these new names are from the financial sector as it’s just been over 5 years since the Great Recession.  There’s lots to take a look at here.  A small food processing company, AMNF, caught my eye.  They have a low market cap but low debt and have been increasing their dividend.  I may do some additional research.