It’s been rumored that Einstein said the most powerful force is compounding [interest].

So what is compound interest?

Simply put, compound interest is interest calculated on not only your initial principal but on any accumulated interest as well.

The most important thing you can do is to start early. The effects of compounding money an extra 10 years can be life-changing!

Here’s a simple example of the effects of compounding: 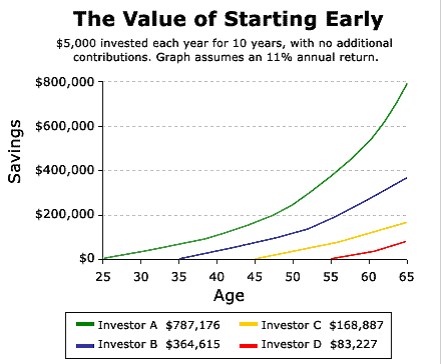 This is just an example, an 11% return over 30 years is almost unheard of unless you invested in a company like Altria Group (MO) that spun off companies like Philip Morris (PM) and Kraft (KFT). Then Kraft (KFT) spun off Mondelez (MDLZ) in 2012.

However, this makes the point I’m trying to get across. There’s a vast difference in the amount of money that has compounded over a 40 year period compared to starting later in life. Investor A has $787,176 when investing only $5k per year! Yes, almost anyone can come up with $100/week to invest.

Starting just 10 years later at age 35 drops your entire ending balance by more than 50%! You still had 30 years of compounding but that extra 10 years more than doubled your final outcome.

1. Start Early
2. Save as Much as Possible
3. Consistently Invest.