It’s been a while since I’ve done one of these and the market is up quite a lot so it will be interesting to see the outcome.

I decided to take the CCC spreadsheet and rank the stocks based on their 10-year YOC. If you are unfamiliar with what Yield-On-Cost is (YOC) then refer to my get started tab or see below for an example. If you don’t know about David Fish’s Champion, Challenger and Contender (CCC) spreadsheet then you are doing yourself a disservice, the link is also on my “get started” tab. It’s important to know about yield no matter which kind of stocks you are trading, for example even if you’re working in the forex market you need to Learn how to trade properly, including all of the technical terminology, in order to make the most of your investment. Here’s an example of yield and its effects.

You may wonder why I care about a 10-year YOC instead of just the 1,3,5 and 10-year CAGR’s. The main factor that the CAGR leaves out is the starting dividend yield. The starting dividend in combination with the dividend growth rate will greatly influence your returns.

There’s a variation of this screen used alot by members of the Seeking Alpha community and it’s coined the “Chowder Rule”. This can also be found now on the CCC sheets. The rule basically adds the starting yield with the dividend growth rate (5-year CAGR) and looks for it to be higher than a certain number. While this can be a useful screen, there is still a discrepancy between dividend payers that have different growth rates but still arrive at the same number. For instance, a 3% yielder with 5% growth would get the same grade (an 8) as a 5% yielder with 3% growth. To me this is like adding apples to oranges. Holding a lower yielding stock with a higher growth rate will at some point provide higher returns assuming the growth rates don’t change. My 10-year YOC would give this 3% and 5% yielder a 4.9 and 6.7 respectively.

The first step was to sort all stocks by their current dividend yield and eliminate any stocks not paying at least a 2% yield.

Next I sorted all columns by TTM P/E and eliminated every stock with a TTM P/E over 20. I do realize this eliminates a lot of REIT’s, MLP’s, and telecom stocks. I’m ok with this since I’m not really targeting these stocks right now. Then I decided to eliminate any Champions with a 10-Year CAGR < 5%, followed by any Contenders with a 5-Year CAGR < 7 % and finally any Challengers with a 3-year CAGR < 7%. This screen eliminates a lot of slow growing companies like utilities. This last screen dropped the list of Champions, Contenders and Challengers to 12(-16), 41(-11) and 122(-10) respectively.

After sorting, I looked for any companies that had a 10YOC1, 10YOC3, 10YOC5 or 10YOC10 of 10% or higher. I applied this to the list of Champions, Contenders and Challengers.

Next, I wanted to look to see if the DGR was increasing or decreasing. I highlighted in red the 10-year YOC’s of companies that were both reducing their rate of increases and still under 10%.

Companies got credit for increasing their dividends at faster rates. For example: The 10YOC5 for AWR in the example above was 4.97 and did not get highlighted in red because its 10YOC5 was higher than its 10YOC10 of 4.09.

Here are the 112(+9) candidates plus additional candidates not ruled out based on P/E left that may be worthy to do further research on: 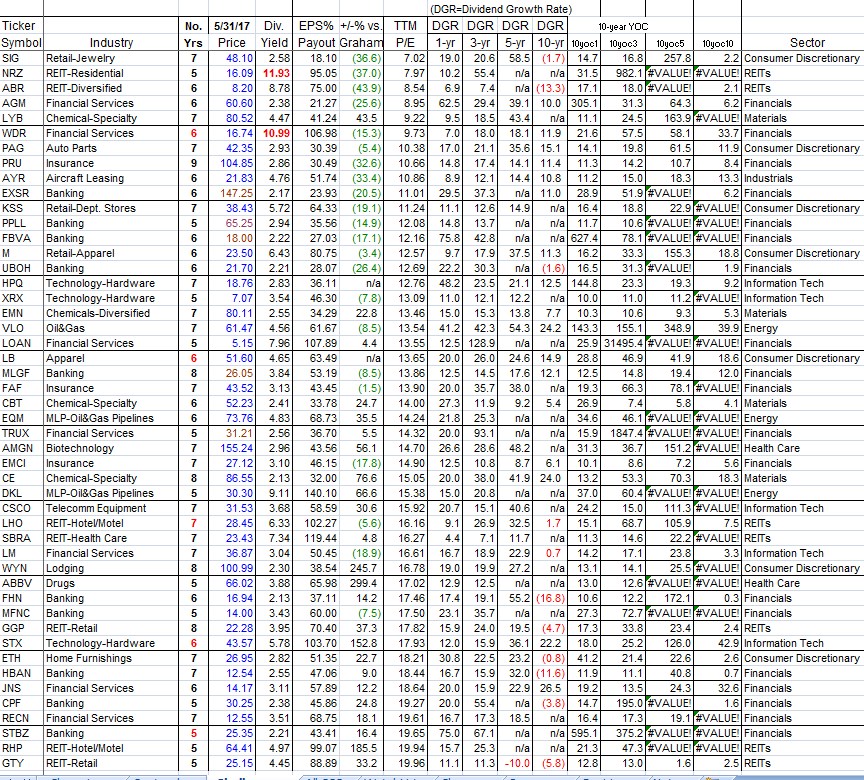 On the Champions list, WOW, there’s only 2! Medtronic (MDT) and VFC Corp. This isn’t a surprise as retail stocks have done poorly as well as healthcare stocks after Trump took over. I do own MDT and have been thinking about adding to it. VFC stock also looks compelling.

Then there’s the Contender’s list with names like IBM and CVS which I own. I’ve added some CVS this year already. There’s also some other bank names I’m not too familiar with worthy of looking at.

The Challenger’s list is still large with all the financials and REITs. A lot of the banks have had 5 years since the Great Recession and are back on this list. I may have to add an additional screen soon for the challengers. There’s some solid companies on this list and if you find the right ones you will be handsomely rewarded. I’ve added some AMGN not too long ago. I’m not too familiar with the others besides CSCO and ABBV.